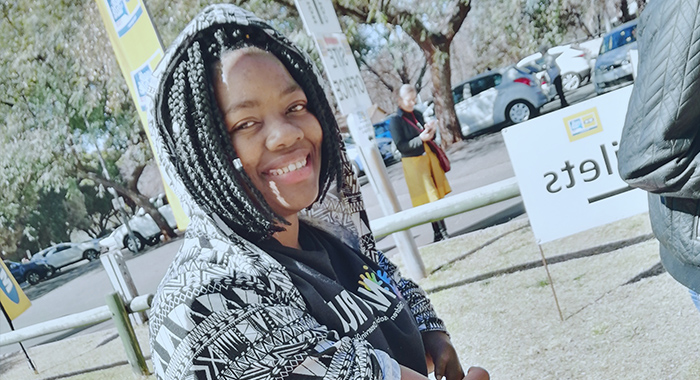 Fakazile Daphney Twala, aka Daphney, was born in Limpopo. She’s the fourth of five children and has three brothers and a sister. Daphney is the only one in her family to be born with a disability, but this firecracker has not let this slow her down. She is an accomplished poet, with a published poetry book under her belt called Purposely Designed, and is also an ambassador for Nappy Run.

Nappy Run raises awareness about the issues facing children with disabilities, advocates and lobbies for their rights, and also raises funds to buy nappies for these children. The highlight of the campaign is a 5km fun run at the Johannesburg Zoo on the first Saturday of November each year, coinciding with National Children’s Day. This year, the event will take place on Saturday, 2 November.

Daphney, who uses her poetry to advocate for the rights of persons with disabilities, has a large social media following and calls herself 4FingersShort. “I have three fingers on both hands so I’m running short of four fingers,” she explains. “Both my hands are shorter than a typical human hand, with my right hand being shorter than my left. My challenges are as simple as opening a door or doing my hair because I can’t reach the back of my head, and tying my sandals. But funny enough, I can tie shoe laces (sneakers and boots).”

Daphney says she is motivated by people’s reactions. “When they see me walking in the streets or how they get amazed when I make my own coffee… that just motivates me to do more.”

She says Nappy Run is an important campaign. “A lot of parents cannot afford to buy their children nappies. This results in children not being able to play with other kids or not being able to enjoy being kids,” she says. “Through this event, we are also teaching people about the rights of children with disabilities. It means a lot to me to be an ambassador for Nappy Run because through advocacy I get to have a hand in changing a child’s life. I get to change people’s mindset about children with disabilities.”

Follow Daphney on Twitter: @daphneytwala1. For more information about Nappy Run, or to make a donation, visit www.nappyrun.org.za.