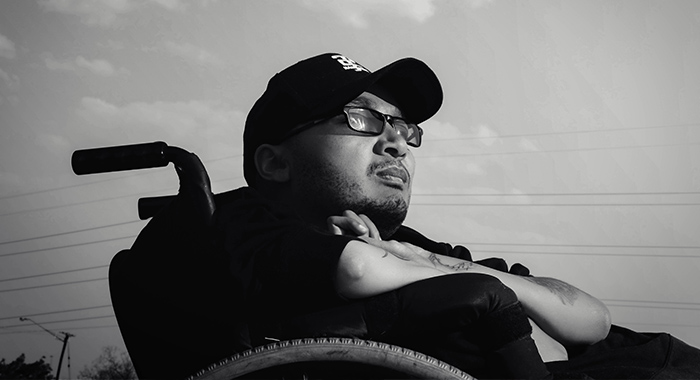 Jonathan Juliun Groenewald is better known as 2J Harmonix. He explains that this name comes from the fact that his first names both begin with “J” – thus 2J – and Harmonix comes from the word “harmonics”, the science of musical sounds, alluding to his passion for rap music.

2J, who is from Eersterust near Tshwane, is a rapper, a motivational speaker, a vlogger and an ambassador for Nappy Run.

2J is one of many dedicated Nappy Run ambassadors and says he graciously assumes this role because he wears nappies and understands the stigma, difficulties and costs involved. “To me it’s a great need. Nappies help me a lot in my daily life,” he says.

He has muscular dystrophy, which causes loss of muscle mass. “Doctors said I wouldn’t live past the age of four, but I’m 36 now.”

2J is motivated by always trying to do better and more than he’s done before. “People don’t know I used to play street cricket, before my disability took a major turn,” he says. “I would sit on the edge of the wheelchair as a spin bowler. I could also bat, and I would get an assistant to run for me.”

2J believes that as a Nappy Run ambassador he can help bring awareness to the needs of children with disabilities. “The Nappy Run fun run event itself is very important. It brings people together, raises awareness and creates camaraderie,” he says. “Being an ambassador means a lot to me. People can look to me for motivation and for reasons to donate funds towards nappies for Nappy Run.”

To follow 2J Harmonix, visit his Facebook page. For more information about Nappy Run, or to make a donation, visit www.nappyrun.org.za.