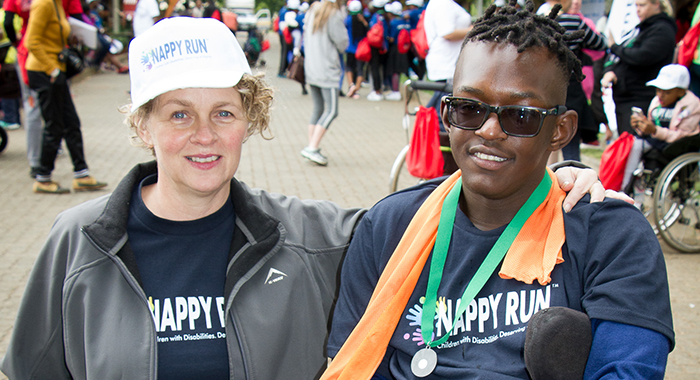 Silomuzi Ngubane, aka Silo, is 18 years old. He’s the youngest of three, with an older brother and sister, and loves soccer. Silo is also an ambassador for Nappy Run.

Nappy Run raises awareness about the issues facing children with disabilities, advocates and lobbies for their rights, and also raises funds to buy nappies for these children. The highlight of the campaign is a 5km fun run at the Johannesburg Zoo on the first Saturday of November each year, coinciding with National Children’s Day. This year, the event will take place on Saturday, 2 November.

Silo has cerebral palsy, a condition that affects movement, muscle tone and posture. He uses a wheelchair and has limited movement of his left arm. He notes the value of being an ambassador because he loves helping other people with disabilities. “Nappy Run is important because it creates awareness about people with disabilities and the basic needs that they have,” he says. “The fun run also affords people who do not have a disability the chance to interact with people with disabilities, and enjoy a day of fun while doing something worthwhile.”

Silo is happy to lend his voice to the campaign and enjoys the support of his family and friends. He dreams of being a public speaker and is motivated by helping people.

He has taken up the sport of boccia, a precision ball-sport similar to bocce, but which requires the use of a wheelchair, and is getting good at it. He also enjoys the experience of flying, and loves travelling to Cape Town by plane. He loves sharing news and views on social media – especially to his impressive Twitter fan base.

“Being a Nappy Run ambassador is a very special feeling,” he says. “I can be part of something that reaches out to a lot of people.”

Follow Silo on Twitter: @uSilomuzi. For more information about Nappy Run, or to make a donation, visit www.nappyrun.org.za.