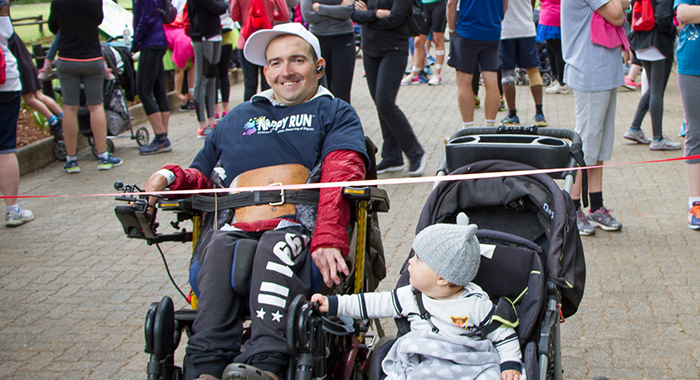 Julius Van Der Wat is 41 years old, although he says he’s getting younger by the day. One of five children, he has a twin brother and three other brothers. Julius is also a Nappy Run ambassador. “Being a Nappy Run ambassador is a great honour to me because I am a part of the campaign that is changing people’s perception of nappies and the people who have to wear nappies beyond babyhood.”

Julius does a sport called Boccia. “It’s an accuracy indoor ball sport played by severely physically impaired athletes,” he explains. “Boccia is a Paralympic sport and is loosely like the sport of Lawn Bowls. I am a three-time South African champion in the BC3 classification in Boccia.”

Something that most people don’t know about Julius is that he’s also an avid teddy bear collector.

Julius chooses to partner with Nappy Run because he believes the campaign is an important part of changing people’s perception of nappies. “A nappy gives people dignity, freedom and independence,” he says. “I wear nappies myself and know all too well about the costs and negative stigma attached to having to wear nappies. I would like to be part of breaking the stigma around people who have to wear nappies beyond babyhood.”

Follow Julius on Twitter: @JuliusVanderWat. For more information about Nappy Run, or to make a donation, visit www.nappyrun.org.za.