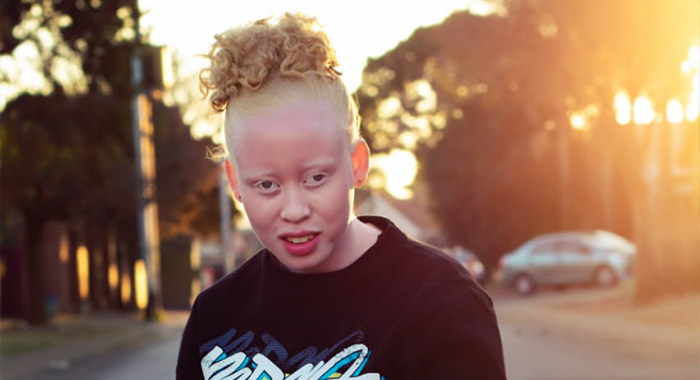 Leandré Kibido is 17 years old and lives in Eersterust, near Tshwane. Like many young women her age, she enjoys music. In fact, she says it “lives within” and is her motivation in life. She enjoys a wide variety of genres, including hip hop and house. She also loves to dance and has been part of a dance academy previously.

Sadly, Leandré has experienced much bullying and trauma – all because she’s living with Albinism. Nevertheless, she says it’s helped to build her into a strong person and her difficulties have been part of shaping who she is today. “I’m completely proud of my skin,” she says.

Leandré is also a Nappy Run ambassador. “This will be my first time experiencing the role of an ambassador and I’m excited to be part of something so great,” she says. “To me it’s a means to create awareness; to be a leader. l believe I’ve been given a chance to experience and learn about a new topic in my life and to represent and create awareness for this event.”

Leandré has been championing the rights of those with Albinism and, through the Nappy Run campaign, is excited to be a voice for children living with disabilities. She has even been interviewed by SABC Radio about her experience of living with Albinism in South Africa.

She says many people think Albinism only affects one race, but that’s not true. “Albinism is not based on religion or culture nor race,” she says. Some of the challenges she’s dealt with include not being able to participate in certain events due to the sun, and facing bullying. “But I’m stronger than ever and proud of who I am today,” she says.

Follow Leandré on Facebook: Vaughnic Leandré. For more information about Nappy Run, or to make a donation, visit www.nappyrun.org.za.